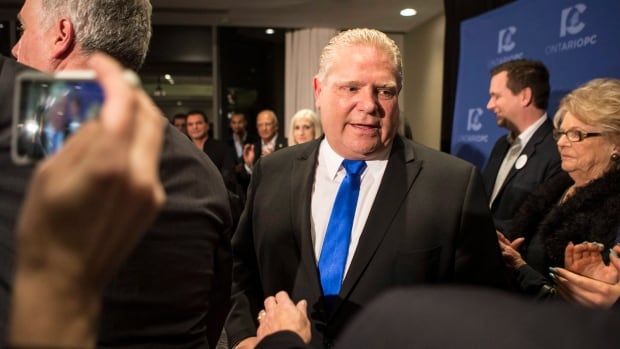 Posted by Chris Young on 3/13/2018 to News
Doug Ford wants free market for cannabis in Ontario
I'm open to a free [cannabis] market and I'm going to consult with our caucus,' Ford says

"I don't believe in the government sticking their hands in our lives all the time. I believe in letting the market dictate," he told CBC Radio's Ottawa Morning on Tuesday.

The former city councillor won the PC leadership race Saturday following a tumultuous convention sparked by the resignation of Patrick Brown, who left the party earlier this year amid allegations of sexual misconduct. Brown entered the race briefly before bowing out.

In his first week of campaigning, Ford promised to repeal Ontario's sex-ed curriculum, cut the carbon tax and end provincial taxes for people making $30,000 or less a year.

'I believe in letting the market dictate'

Q: What are your plans for regulation and enforcement for marijuana when it becomes legal? Would you privatize pot stores?

A: We're going down a path that no one really knows. I have been open to a fair market and letting the markets dictate. I don't like the government controlling anything no matter what it is.... I'm open to a free market and I'm going to consult with our caucus.... I don't believe in the government sticking their hands in our lives all the time. I believe in letting the market dictate.

Q: Will you be cutting public service jobs?

Q: You've said no to any kind of carbon pricing. How will you make up for the billions of dollars of revenue from the tax?

A: It's only crucial if you want to make it crucial. It's a job killer and an absolutely terrible tax. It puts us on an unfair playing field.... You are trying to compete against other jurisdictions in the world that don't have a carbon tax and all it does is drive up cost of all goods. It's hurting everyone in Canada.... People don't want to be punished because of this carbon tax and there are other ways out there of being environmentally friendly.

Q: You've said recently you plan to repeal Ontario's sex-ed curriculum. In the past, you talked about reviewing it. Which is it?

A: We are going to repeal it because this is an issue of respecting parents. Parents weren't consulted and they should have been. What happens to our own kids is our business. It's not about the liberal ideology that's being breathed down our backs from [Ontario Premier] Kathleen Wynne.

'I don't give 2 hoots about Donald Trump'

Q: Are you Ontario's version of Donald Trump?

A: No.... But look what is happening south of the border; we have trillions of dollars going into that country because they dropped the tax rate. Unemployment is [the] lowest in 20 years and manufacturing jobs are coming back.... I'm Doug Ford and we're going to turn this province around. I'm focused on Kathleen Wynne and I don't give two hoots about Donald Trump. I'm focused on Ontario.

Q: You've promised to freeze Ontario's minimum wage at $14 an hour. But would you roll back the hike to minimum wage?

A: No, I wouldn't. It's not that I like it. Sixty-thousand people have been laid off so far and it's going to continue.... When the minimum wage goes up, the government is gouging you — there's a little hypocrisy happening there. What I plan on doing is anyone making $30,000 or less will be paying zero tax and because of that they are going to have $160 extra every month in their pockets. I'm going to reduce taxes and put money into the pockets of the most vulnerable.